Here's a Recent Course I Made

It is a rare exception when I can publicly share one of my online courses. That is because most are on a corporate learning management system (LMS) which is only accessible to my fellow employees or they are on our Intranet, which is also inaccessible to non-staff. This course is one I created for our public site and is accessible to the world. It is a pretty straightforward course that includes scenario based learning. So far, the design appears to be working well in assisting our health care members to learn more about using their benefits, especially important due to recent benefit changes. Please use the link below to take a look at the course. 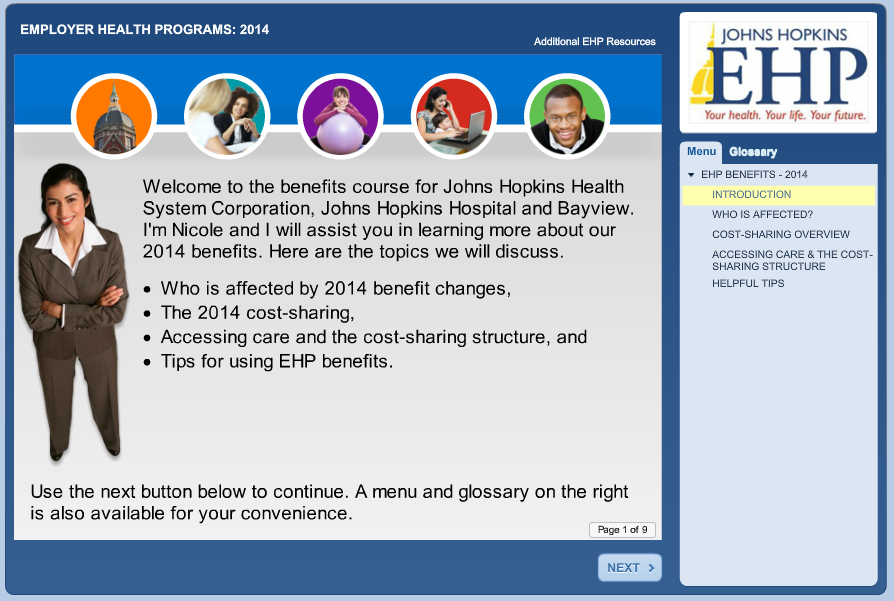 Feel free to also visit my eLearning Screenshots Pinterest page to see some screenshots of a few other courses I've made. And of course there is the Free eLearning page which chock full of examples from others.
Posted by Jeff Goldman at 5:49 PM No comments:

There is No "PowerPoint"

So often I get a call from subject matter experts (SME) and other stakeholders regarding elearning courses asking, "Can't you just send me the PowerPoint?" My answer of "There is no PowerPoint" is usually not received well and followed by a tone of disbelief. I don't deny them a PowerPoint because they will probably compromise the instructional integrity of the courses, which is possible, or because I am selfish. It is usually because the course simply wasn't made in PowerPoint or only portions of the development process was made using PowerPoint and what they would get would be fragments of a course at best. However, when people outside of eLearning see the final product they associate it with the closest thing they are familar with in their world, which is PowerPoint.

So, here is the deal:

Most courses are developed with tools that are not PowerPoint. For example, Captivate, Flash, ToolBook, Storyline, etc. All of which I have used and been asked to "send the PowerPoint."

Some development tools use PowerPoint as an initial interface, but it is in combination with eLearning development applications. An example I have is Articulate Studio. This can be difficulty to explain to the SME that is eager to get hold of your elusive "slides." This is especially true when they have seen you working in PowerPoint when story boarding or other early stages of development.

So, the moral of the story is let your SMEs know up front about the development tools you will use and what deliverables can and will be provided.

Feel free to add your comments and opinions. I'd love to hear if you have had similar experiences and how you've addressed it. Thanks.

Posted by Jeff Goldman at 7:30 PM No comments:

Jeff Goldman
I am employed as an e-Learning Designer in Baltimore, MD. I hold a Master of Arts in Instructional Systems Design from the University of Maryland, Baltimore County and have fifteen years experience designing and developing e-learning. My experience also includes nineteen years of designing and facilitating traditional classroom training in the banking and healthcare industries and for nonprofit organizations.

eLearningCylops.com by Jeffery Goldman is licensed under a Creative Commons Attribution 3.0 Unported License.